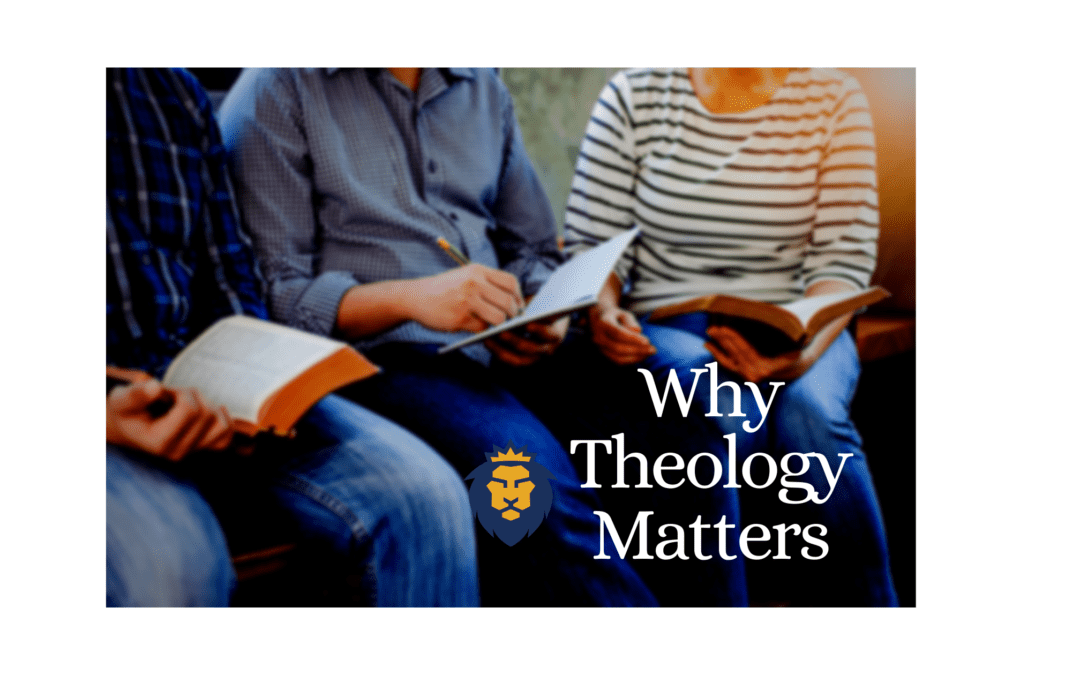 A few decades ago, a number of American churches began to impugn and disavow the systematic teaching of Christian doctrine and theology. The argument went as follows: the goal of the Church is to be winsome, but big words such as sanctification, justification, and atonement can be off-putting to people in the pews. In fact, some church leaders even avoided using the words doctrine and theology. Over time, intentional instruction in theology was thus replaced by “life-application” material from Scripture—how to manage your finances, how to protect your marriage, how to get along with people at work, etc., etc.

I am not criticizing church winsomeness or church messages about the application of Scripture to life. Obviously, the Church is supposed to be winsome, and applying biblical truth to life is a fundamental part of the Christian walk. These are givens. For a Christian not to live like a Christian is to live in the grasp of sin.

But the Christian community’s hesitancy to embrace theology and theological discussions has led to a Christian community that has problems “thinking theologically”—and if our current cultural discourse about racial reconciliation does not underscore the importance of right theology and orthodox theological instruction, I don’t know what does. Moreover, the current cultural discourse calls attention to the fact that theological instruction cannot be removed from biblical “life-application” instruction if it is going to be meaningful; rather, Christian theology is the very foundation of the Bible’s application to life. Thus, right theology necessarily comes first.

You see, America is currently experiencing something quite rare. For the first time in decades, the secular culture is pushing in the same direction as the theological underpinnings of the Church: that is, both hold that all people have equal value and that all people should be treated as if they have equal value. The problem is that secularists and Christians anchor this belief in vastly different worldviews, and different worldviews can lead to different outcomes, even if the surface belief is the same. One worldview will lead to solutions that are hollow and temporary because of the shaky, illogical foundation upon which they are built; the other worldview will lead to solutions that are solid and permanent because they are built on a logical foundation and eternal truth. As the appointed steward of this truth, the Church has thus been handed on a silver platter both a leadership opportunity and a chance to reset its course in a meaningful way.

Let’s examine the two primary worldviews that are currently speaking in unison about racial injustice: the naturalistic worldview, which is dependent on evolutionary theory, and the Christian worldview. At worst, the naturalistic worldview cannot hold together as a system of thought when it champions racial equality, and at best it cannot offer a framework that encourages society to permanently value equality and justice for all people.

The reason the naturalistic worldview cannot promote equality and be consistent within its own framework when doing so is that evolutionary theory is one of naturalism’s peg legs; thus, naturalism must come to grips with the evolutionary position that some taking advantage of others is normal and acceptable. Survival of the fittest. Only the strong survive. The very heart of the naturalistic worldview holds that it’s perfectly acceptable for some to treat others as if they don’t matter. Thus, when naturalists champion racial equality, they are wanting to have their cake and eat it too.

Now, I am not saying that evolutionists cannot be good people or be sincere about wanting cultural change and racial equality. I am merely pointing out a worldview inconsistency.

Of course, we must consider the naturalist’s likely retort to this charge. A naturalist might counter that I have misunderstood evolutionary theory and argue that it’s not always about one entity destroying the other; rather, it’s about what is best for the propagation of the species—and equality is what’s best for the human race.

We may agree that equality is best for humanity. The problem is that what the naturalist really means is, “Equality is best for humanity, as decided by humanity’s leaders, at this point in time.” In other words, this value is anchored in something very fickle, fallible, and selfish—the human being. Human beings have decided that equality is good for the human race right now. But what about 100 years from now? Or 350 years from now?

Societies tend to be dangerously naïve about how quickly the unthinkable can happen, and this reality is precisely why the study of history is so important. We do well to remember that Hitler reigned less than 100 years ago and that he was a scrawny little man who rose to power after being a homeless, failed artist who was once deemed unfit for military service. No one saw him coming as a “powerful” man—yet he persuaded a large percentage of his countrymen and countrywomen (not all) that an entire race of people did not deserve to live. In other words, much of German society believed that racial equality was NOT best for society, and it killed millions of people because of their ethnicity. Moreover, the Nazi Party was dangerously close to becoming a world superpower and propagating its worldview across the globe. Values that are based only on humankind’s beliefs are always susceptible to both error and change.

The Christian worldview, however, offers answers that are solid and permanent. The Christian worldview holds that all people have equal value not because human beings in the year 2020 say so, but because all people are created by a loving, sovereign, righteous, and perfect God who expects certain behavior from those He has created in His image—and as a God of perfect justice, He has some strong words and consequences for those who do not heed His guidance. Moreover, because He never changes, his disapproval of racism will never change. As our nation seeks to end racial injustice, the Christian worldview has the winning argument—and it wins the argument with its theology!

Along a similar line, the orthodox Church holds to a very important belief in something called the sin nature. That is, all men and women are born sinful and are inclined toward evil. It is a belief that does not sit well with many people in today’s culture: even a popular country music artist lyricizes that “most people are good.” Now, I don’t want to be too hard on Luke Bryan here, for I realize that the sentiment he is expressing is somewhat different from the theological position at issue. Yes, the majority of people live their lives without acting in violence and hate toward others. But according to Scripture, sin is any behavior that is contrary to the guidance God has given us, and the Apostle Paul famously wrote that “all have sinned and fall short of the glory of God” (Romans 3:23). Every human being is capable of doing horrific things.

While the doctrine of the sin nature may not be popular, it is fundamental to addressing the problem of racial injustice in a solid and lasting way. It is precisely the failure to recognize humankind’s sin nature that could lead to society changing its mind about racism in 100 or 350 years. If we believe that “people are basically good” and therefore fail to acknowledge humankind’s inclination toward sin and evil, then we will elevate humanity to a dangerous level of authority. We will depend solely on people to solve the problem by crafting the type of solutions they are best at crafting—legislative ones. And then we will rely on legislative solutions. Again, though, the problem is that people are imperfect. While we certainly need legal solutions—I am not arguing against them—we must also recognize that human beings have the capacity to legislate against racism at one point in history but encourage it at another point in history, just as Hitler did less than 100 years ago.

Consequently, we do well to realize that the best solution to racial injustice is not legislation but regeneration (another theological term). Laws can change because people change. The love of God poured out on human souls, to make them think differently and act differently, is infinitely more powerful and lasting. People are looking for solid and eternal solutions to our current national crisis, not hollow and temporary ones. So again, the Christian worldview has the winning argument—and it wins the argument with its theology!

And the doctrine of regeneration cannot be separated from the doctrines of the gospel and the Holy Spirit. Paul wrote to the Corinthians that “if anyone is in Christ (and therefore has the Holy Spirit dwelling within), he is a new creation” (2 Corinthians 5:17). Being a “new creation” does not mean that we become perfect in our mortal bodies; unfortunately, we still sin. It does mean, however, that the Holy Spirit now lives in us and enables us to love magnificently and live righteously. In response to this “new life,” then, Paul instructs the Ephesians “to put off your old self, which is being corrupted by its deceitful desires; to be made new in the attitude of your minds; and to put on the new self, created to be like God in true righteousness and holiness” (Ephesians 4:22–24).

The important lesson here, as it relates to the current cultural discourse, is that the Christian worldview once again takes the better position. Legislation may stop racist behavior, but it cannot prevent a racist heart. Compelling people (through legislation) to not do racist things is an inferior approach to promoting and embracing a worldview which teaches that people can and should love all others selflessly because they have the very Spirit of God, who is love, dwelling within them—and because this God who created them and sent his son to die for them expects such love.

Isn’t this the lasting change we want? Don’t we want a collective change of heart, not merely the forced prevention of racist behavior? The Christian worldview, again, has the winning argument—and it wins the argument with its theology!

The Christian worldview is desperately needed as society deals with today’s challenges. Unfortunately, the very worldview that has the best solutions is marginalized and mocked in contemporary culture. The Christian community must demonstrate in its social discourse that Christian theology matters in the problem-solving arena. Thus, we can no longer avoid theological discussions simply because they require more intellectual effort than we would prefer to exert.

I recall visiting with a young ministry major at a Christian university when I was completing my doctoral research. The young man lamented the “dumbing down” of theological instruction within the Christian community—particularly within youth groups—and made two statements that have stuck with me to this day. He said that high school students can do chemistry and geometry, so it is insulting for church leaders to think they cannot handle theology and doctrine too. He also said that many youth pastors expect less of students (theologically) than students expect of themselves. The young man’s comments seem especially relevant today.

I am proud to serve at Warner University at a time when people are looking for meaningful responses to big cultural problems. Warner University students—and students at many other Christian universities— are required to take courses in biblical worldview, to examine how the orthodox theology of the Christian Church serves as the best solution to our culture’s most serious problems.

I hope the institutional evangelical Church will follow suit. In many ways, now is the Church’s biggest moment in recent history. Theology matters. It’s time to return to it.